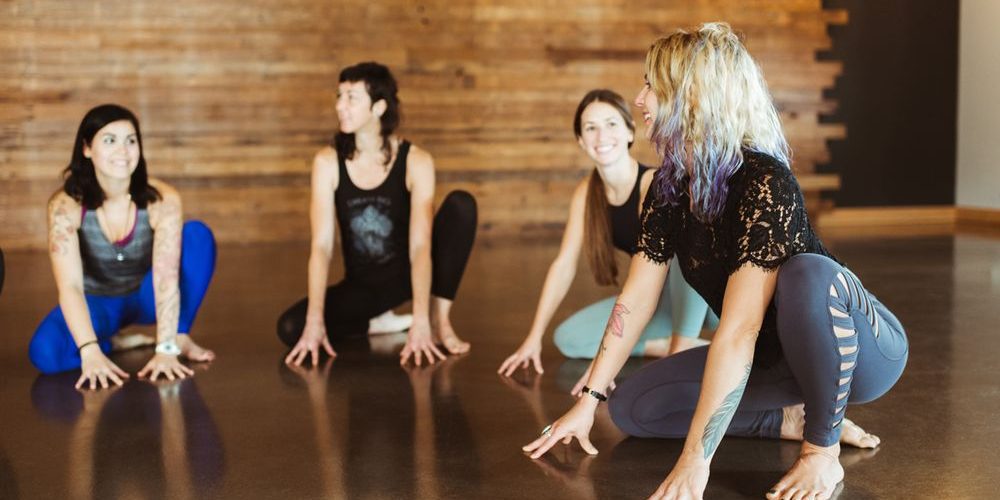 The typical yogi of today is a householder, a family person working and/or going to school, juggling the tasks of modern life. They don’t have time to keep up with multiple movement practices, so they settle on yoga because it’s rewarding on so many levels—psychological, mental, emotional, social, and physical. Because it does satisfy so many of our needs, yoga presents itself as the perfect one-stop shop. But sticking to your standard yoga class schedule is not the cure-all for your problems. It’s not even a cure-all for your physical ailments. It does, however, provide the perfect framework.

There’s not enough truth-speaking around yoga-related injuries today. For his upcoming book, WAWADIA: What Are We Actually Doing In Asana? yoga teacher and writer Matthew Remski interviewed 100 teachers and practitioners about their yoga-related injuries and their stories of recovery. Remski defines asana-related injury as “any type of tissue damage, diagnosed or not, acute or mild, with sudden or gradual onset, that you believe was caused by performing asanas or vinyasas to the best of your ability and according to the instruction that you received.” As we are waking up to the fact that yoga practice does not exempt us from the threat of injury, we’re only just beginning to have a transparent conversation about how to make yoga safer for everyone.

Modern Western yoga presents an optimal opportunity for individuals to reconnect with their bodies. In the classroom, students may adopt positive attitudes toward their bodies, an awareness of how they work, and a love of movement. But too often we fail to recognize that the body-embracing, mindful movement practice we learn in yoga class can be applied to any and all movements, not just the classical asanas that we see in books.

As a culture, we’ve taken snapshots of postures and sold those images as “yoga.” First of all, yoga is in motion, so at the very least we need an upgrade in our media presentation from still shots to video. But to be more accurate, yoga isn’t something you can see at all; it’s something you can do, and it’s something you can feel. Because the primary cause and effect of yoga practice is below the surface, it simply isn’t possible to take a picture of it. Having “bought in,” however, most practitioners find a style they like and stick with it, and this only increases their potential for injury. Too often yoga teachers convince students they can teach them the “right way to move.” Students then begin to believe they can throw out all the other types of movements and sign up for exclusivity. The commodification of yoga comes with a cost, and that cost is the exteriorizing of a practice that is primarily interior. The effect on the body can be a form of imprisonment. You can buy a great down dog, but you’re going to need to throw it away tomorrow and get another one. So don’t get too attached.

The commodification of yoga comes with a cost, and that cost is the exteriorizing of a practice that is primarily interior.

As co-owner of Yoga Union Community Wellness Center, a yoga studio in Portland, OR, I strive to emphasize diversity and an open approach to learning and teaching. I put the needs of our students above the needs of our business by remembering that our business is here to serve the best interest of our community, and by remaining humble to the fact that we can’t possibly be everyone’s one-stop shop.

Many students don’t realize that yoga is more of an attitude and an approach than a list of poses, and therefore they don’t translate their yoga into other types of activity. When they do attempt this “Hanuman leap” into the larger world of movement, they often bring with it some pretty stringent concepts or principles about the “right” way to move every time they move—principles that come from their yoga practices. In this way, dogma is introduced to the flesh; students begin to move within a framework of “right” and “wrong.” I’m not saying there aren’t healthy and harmful movement techniques, but when we declare our allegiance to a single style or practice of movement—power vinyasa, hatha yoga, ashtanga, Bikram—even using DVDs and MP3s over and over again—it can result in a dangerous repetition of movement patterns. Movement becomes prescriptive and overly controlled.

As a private yoga therapist, I’m a big proponent of alignment in yoga, form in exercise, and even teaching technique when it comes to executing mundane daily movements. But as soon as any one of us thinks we’ve got it “right,” we can be sure we’re actually “stuck” in our way of thinking about the body. And as soon as we’re stuck in the way we think about the body, we’re stuck in the way that we move it. The body is a wild thing—it suffers when caged in this way. Alignment is meant to liberate, not imprison us.

Here’s a question: As your yoga practice has progressed, has your movement become more diverse, or more uniform?

Yoga is not a one-size-fits-all undertaking. It’s a moving, breathing, natural, wild practice that must adapt and change in order to thrive. Taking the same class from the same teacher who’s always teaching the same style, following the same alignment cues, doing the same down dog, and exploring no other types of movement outside of daily living means your movement is uniform. This means you’ve walked right into a cage, taken your comfortable seat, and chanted “om” as a denial of your animal nature. The body needs natural movement, and natural movement is a diversity of movement. Everyone from a barista to a baseball player can incur an injury because of repetitive movements. Why would yogis be exempt from that?

If we really want to liberate our bodies, we can focus on diversifying our practice beyond the boundaries of the poses we’ve learned in the classroom or in books.

Aside from lack of time and the one-stop shop appearance of yoga practice, another reason we become yoga “specialists” is that when we look at the myriad of asanas out there, they appear to encompass a full spectrum of possibilities for the body. We think “If I can perform all of these poses, I’ll be perfectly balanced.” So we pursue diversity in the form of forward bends, backbends, arm balances, hip openers, and twists. But as diverse as these images appear, they’re still just snapshots, and they’re still just a set of possibilities. Though the cage may be big, beautiful, and relatively diverse, it’s a cage nevertheless. If we really want to liberate our bodies, we can focus on diversifying our practice beyond the boundaries of the poses we’ve learned in the classroom or in books.

Another reason we specialize in yoga is that we want to “master” it. We want to get really good at it, meaning we want to attain as many of the forms as possible. We say “I got my handstand” as if we made a great purchase and now we own something. And since so many of these poses require such a commitment to attain, we end up again lacking the time to do anything else because of our pursuit toward yoga mastery. If becoming a yoga master is your goal and you’re willing to sacrifice the health of your body for it, continue business as usual by practicing nothing but yoga asana as your sole movement practice. But first, I urge you to ask yourself this: Are you pulling? Jumping? Running? Throwing? Lifting? Are you changing up the terrain over which you move (yoga mat)? Are you getting cardiovascular exercise? If all you’re doing is yoga, more than likely the answer will be “no.” And if your answer is no, then the truth, however difficult it is to stomach, is that you lack diversity in movement.

The key to physical health is diversity of movement. Without shaking up the routine a little, without introducing other forms of movement to explore the muscles and joints in different ways, yoga enthusiasts might end up taking a forced vacation from their beloved mats and grappling with a lot of pain. If this has happened to you, or if you feel you’re getting stuck, gently break through your shackles by narrowing or widening your hands in down dog, maybe even take off across the floor in down dog! Jump up and down a little in warrior. Twist in and out of revolved triangle. Just begin exploring ways of diversifying your yoga practice. You may find this highly exhilarating and quite liberating. If you’re ready to get way out there, go climbing, take a kickboxing class, run, swim, bike, jump on the trampoline, climb a rope, lift some weights! But try it as an extension of your yoga practice. Stay in your body, and avoid your tendency to perform. Focus on your breath and use the movement as a means for mediation. Try cross-training.

Regardless of your spiritual orientation, yoga asana is movement, and movement isn’t balanced when it’s dogmatic.

Why is cross-training essential? In the fitness world, when athletes say they’re cross-training, they really are cross-training. They’re trying other ways of moving for the sake of building and maintaining healthy, balanced bodies. They do yoga. They swim or bike. They engage their bodies in a wider range of activities. But in the yoga world, this just doesn’t seem to be happening. Consequently, yogis are doing the same movement patterns repetitively. If we viewed yoga as a sport, we would know it’s imperative to diversify. But because we view it as “spiritual,” bordering on religious practice, it starts to point us in the direction of choosing one style of movement in order to prove our devotion. Regardless of your spiritual orientation, yoga asana is movement, and movement isn’t balanced when it’s dogmatic. If you have the means to, seek professionals who understand movement and the importance of diversity rather than someone who is attempting to teach you a method or a style.

It’s particularly important to be careful about exploiting certain areas and under-using others. Exploitation of your strength/flexibility or under-using the “tighter” or “weaker” areas of your body will leave you vulnerable to injury and recurring pattern-induced pain. Getting a regular assessment of your abilities really goes a long way toward understanding your body and protecting it. A knowledgeable therapist can help you answer essential questions that will help ward off injury. Questions such as “Where is my body compliant?” “Where is my range of motion balanced?” and “Where am I exploiting certain areas?” are all great contemplation. After all, we all have different capabilities and limitations, and being real about where the boundaries are is the first step in overcoming them.

Yoga teaches an appreciation of the body. Take that with you into every move you make without falling into dogma or neurosis. Leave behind the uniformity and the struggle to stay “in alignment.” Do yoga, but don’t quit exploring other ways to move as well. This practice is about awareness and diversity, not slipping into habit and the creature comfort of certainty. Get out and play. Don’t be afraid to make mistakes. Enjoy breaking free from patterned behaviors.